5 reasons everyone (but my daughter) should work in a restaurant 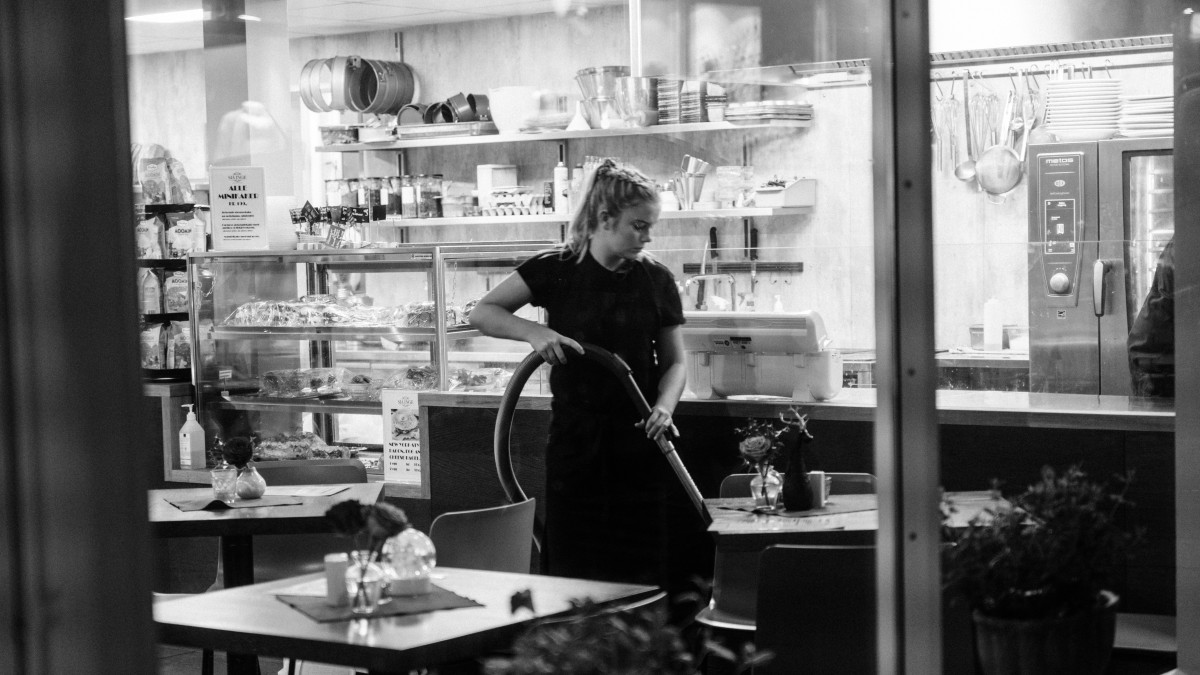 I worked in restaurants for 16 years! Here's why everyone (but my daughter) should work in a restaurant.

Throughout my life, I have worked many jobs in a variety of fields, but no job taught me more skills than working in a restaurant.

I traveled extensively after graduating high school, ending up back in my hometown at 18. I was a 120-pound skinny girl with glasses the size of my face (thank you, 1990s). I worked three jobs: a clothing store in the mall, a gas station/convenience store on midnights, and a pyramid-scheme company selling cologne and perfume. I bought more than I made at the clothing store. The gas station/convenience store was dangerous. And I wasn’t successful at selling knock-off Cool Water.

So I lined up another job at the family restaurant of my former youth leader. Ducky’s Family Restaurant was a staple in our community. We were known for our Henny Penny chicken and potato wedges (both cooked in a Henny Penny fryer), but the owner, Don Duncan, was a man with deep ties in the community.

I started training as a waitress. The woman training me told me that I was never going to make it as a waitress because I sucked at it. My small frame was nothing for my red hair and stubborn determination to prove this woman wrong.

For the next 16 years, I worked off-and-on at this restaurant and a few others, even managing for years. I learned so many things during my time working in restaurants. As a result, I firmly believe everyone (but my daughter) should work in a restaurant. Here’s why.

Reason 1: You learn to communicate.

You learn to listen.

A huge part of being able to communicate effectively was being able to listen. Communication was sometimes skewed. I’ve had customers who had no idea what they wanted or were under the influence of something. Trying to get a grown, drunk man to articulate what he wants to eat is like trying to get a seal to speak clear English. Even if customers were not inebriated, the more I listened, the more customers felt connected to me. Listening to customers was a monumental part of why I was able to make enough money as a waitress to support four kids on my own. Beyond that, I also had to listen to my peers. If a hostess was having a particularly bad day, I was a shoulder to cry on. If the cook was excited about a new sandwich, I was a taste-tester. What did that do?

You learn how to speak up and when to shut up.

Customers tend to be brutally honest. Customers told me if their drink was too sweet or if they thought the food tasted bad. Sometimes, I had to shut up and deal with the issue. But sometimes, I had to speak up. Regulars are brutally honest, but they are also critical and outspoken. They regularly told me what they think of my outfit, my hair, my body, and more. I’ve had customers yell and berade another employee. Those are the times where I found my voice and learned how to stand up for myself and others. What that looks like is different for every individual. There were times when I had to quietly control my voice to say something to a customer while other times, I had to poise myself in a way that my voice projected confidence and sent fear to that individual. What did that do?

Knowing how to speak up and when to shut up helped me learn control. The power in knowing I could compel someone else to do something by my words, lack thereof, and position afforded me a confidence that I never would have been able to find in another job.

Reason 2: You learn to deal with the best and worst in people.

Working in a restaurant shows the depths of desperation and despair by highlighting the needs of others. Some customers were hungry for food, but most of my customers were desperate for attention, conversation, and respect. I remember more than one regular customer coming in after a loved one had passed away. They didn’t know where else to go or didn’t want to face a quiet home, so they came to us. When people were hungry, I was either their favorite person (because I could get them food) or their least-favorite person (because I was standing between them and their food). That brings out the best and worst in people, including those working in the restaurant.

My late mother-in-law and father-in-law used to come to the restaurant to eat. The smile on their faces was contagious, and I loved waiting on them. (I later learned that my mother-in-law was smiling to smuggle out chicken that she would hide in her pocket to take to my husband after a long day of work.) There were other customers who were miserable and carried that onto everyone else.

I remember this customer when I worked as a manager at another restaurant. He was a generally prickly old man, but one particular day, he was especially pissy. He yelled at one of my waitresses, demanding something that we didn’t have on the menu that day. She came back to the kitchen, told my cook what he wanted, ran to the sink, and started crying. My cook started yelling at my waitress, inciting more tears.

I had three people to deal with in that moment: the customer, the waitress, and the cook. I walked out of the kitchen to the customer, told him to chill out, and I would see what I could do to buy myself a little time. I went to the waitress to calm her down and to request she goes to the bathroom or home to pull herself together with no penalty for either choice. Finally, I went to the cook to deal with her yelling. She turned around with a knife in her hand, threatening and waving the knife at me.

Now, I have a whole other situation to deal with.

At that point, the waitress and the pissy customer saw what was going on and tried to come to my rescue.

In a matter of minutes, I saw the worst in these three people and the best in two of them.

Working hard is something that many people do, but working hard in a restaurant is an entirely different beast. Everyone in the back of the house is moving constantly on horrible floors, lifting something heavy, and/or straining their back. Everyone in the front of the house is moving constantly on horrible floors, carrying multiple things at once, and attempting to balance without running into others regularly. The constant, physical movement coupled with the mental, emotional, and social demands create an exhaustion that is like no other. After a hard day’s work, it’s not uncommon to need a nap before moving onto other tasks. Eating is also a task.

When you’re in the back of the house, you can come to the front of the house when people relieve you. That’s great for breaks and eating a meal. Someone has effectively replaced you in the back.

But the front of the house is different. Even if someone replaces you, people see you and have expectations. I could come in on my day off, but customers who knew me could still tell me what they need and ask me to help them get it from the “other waitress who isn’t as good as you.” So you get used to ordering food and trying to eat it quickly in between taking care of customers. The result?

You’re eating mostly cold food over a span of several hours. That’s the type of gross, food prep that is necessary for parenting.

Reason 4: You learn about sexual harassment.

I started waiting tables at 18. I was a skinny, goofy-looking kid. But I cannot tell you the infinite amount of sexual harassment I faced on a daily basis. I have 20+ letters from grown men (often over 40) who were propositioning me, knowing that I was more than half their age. The worst part?

I had to take care of it myself while minimizing the impact on my tips.

You read that right. At 18, I had to tell 40-year old, grown men that I wasn’t interested in them, but hey, you should still tip me. I couldn’t tell them how disgusting I thought they were. I couldn’t tell them how disrespectful they were. I couldn’t compare myself to their daughters (who were sometimes older than me). I had to gently let down these men who talked about and referenced my breast, my butt, and even my vagina usually without such delicate terms. Only a few ever tried to or touched me, but they faced a wrath that kept them away from trying it again.

Both of my oldest boys have worked in restaurants, mainly in the kitchen. I’ve not worried for them. But my daughter? I worry each and every day about her safety because she works in a restaurant. At 18, she’s way cuter than I ever was, and she’s already had a full taste of sexual harassment from customers and peers. As proud of myself as I am for handling and surviving those situations, I don’t want my beautiful daughter to deal with that.

Reason 5: You learn about friendship.

I made a ton of friends over my years as a waitress, dishwasher, hostess, cook, and manager. Those friendships are so incredibly authentic to who I am as a person and are such an integral part of how I survived those times.

I remember a holiday party we had at someone’s house. One of the cooks had been trying to date me for months. He was married and significantly older than me. He showed up at the party and tried to kiss me when one of the dishwashers came to help me, fought this cook, put him out, and the manager followed behind and fired him. He ended up stalking me for a period of time, resulting in a restraining order and several nights of me being walked out by my friends.

When my mother-in-law passed away, my friends showed up at the funeral with Henny Penny chicken and potato wedges for us to eat. They didn’t realize the impact of that chicken, but that friendship meant more to me than most others I’ve had throughout my life.

I started waiting tables at 18. I was pregnant with, gave birth to, and raised four kids as a waitress. I became the person, the mom, and the woman I am today in that restaurant. In 2011, I broke my ankle at that same restaurant I started at so many years before, effectively ending my restaurant career (with the exception of a little help during Restaurant Impossible).